"Join with the terminal and terminate defective synthetics."

This was recommended to me in person last week... but embarrassingly, I can't remember who recommended it. I have to start taking better notes! It's currently available in Humble's 'Trove', a collection of big and small games that are free to their monthly subscribers, and my guess is that it will be made available for sale to non-subscribers, around the start of September. So if you don't want to sign up to a subscription service, you can just wait a couple months. It's out now on Itch for $10.

Here's why you should play it: As Rob Fearon once put it, 'we're 30 years on from some genres and barely touching the sides'. Subserial Network is one of those short-form experimental games that gestures at the great untapped wealth of ideas that the medium of games is capable of, that suggests we are nowhere near touching the sides. It is a game about mutability that demonstrates the unprecedented mutability of the form. 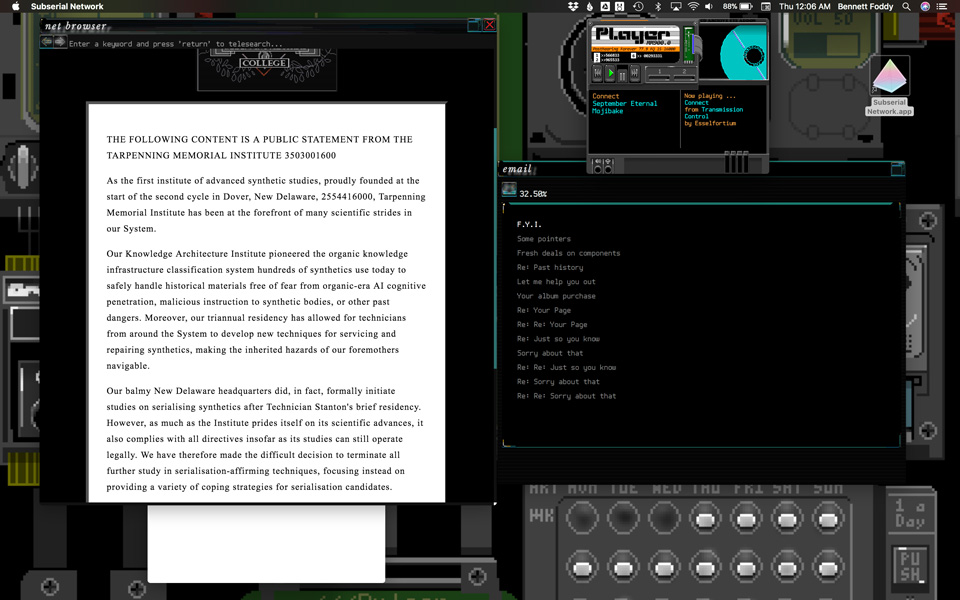 Subserial Network is one of those games that presents itself as a desktop application, paying homage to old multimedia experiments like the excellent 1996 CD-ROM classic Spycraft: The Great Game and of course to Christine Love's seminal 2010 piece Digital: A Love Story with which it shares a number of visual and narrative themes.

Park describes the game as a 'multi-window experience' but that significantly understates the radical nature of the design. We have lately seen a number of 'computer within a computer' classics, from Digital and Beglitched to Cibele and Her Story, but unlike those games, Subserial Network consists of various programs and files that live on your actual computer desktop, and the wallpaper in these images is just a suggested wallpaper image that they provide in the folder, that I applied to my own Mac desktop. In a way that goes beyond other experiments like Ivan Zanotti's horror game IMSCARED or Robert Yang's Hurt Me Plenty, it breaks that most inviolable of fourth walls, the boundary between the game and the rest of your computer. Games are fiction (which is supposed to stay in-world and in-character) but they are also software (which is supposed to stay obediently in its sandbox).

Thematically that is a perfect metaphor for the story the game tells, which is about characters who are driven to cross forbidden digital thresholds in pursuit of recognition and happiness. 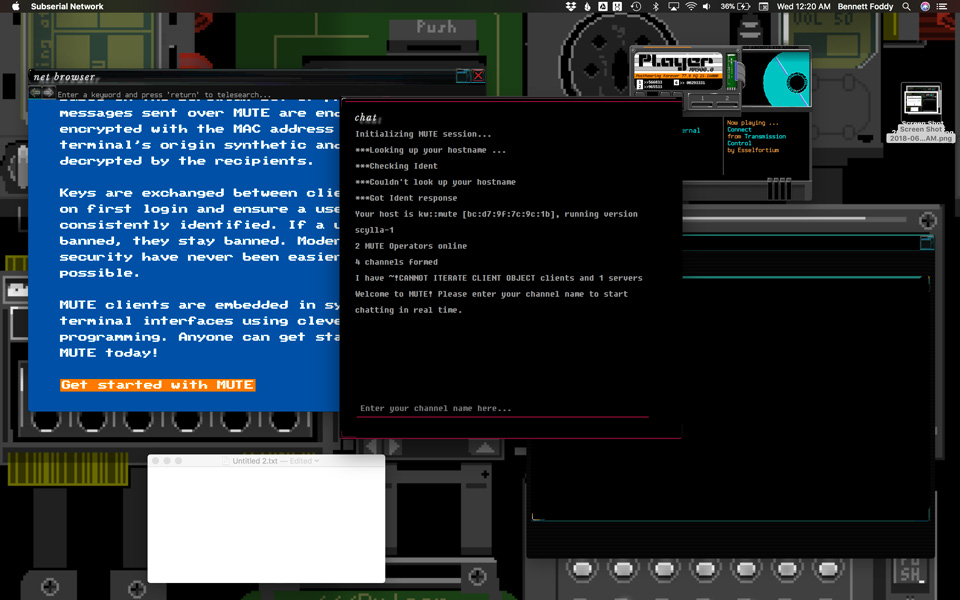 Subserial Network subtly tells a story about the optimism embedded in early digital culture; of the hope many of us shared that new, more parallel and anonymous modes of communication would yield more authentic, fluid identities and deeper and more empathetic modes of human connection. It uses the visual language of early digital protocols like BBS, email and Lynx, to evoke a sense of nostalgia for that utopian vision, even though the narrative is set in a distant posthuman dystopia. At the same time, it uses this setting to tell a second story about trans experience, alterity, gender dysphoria, and self-actualization, reframing human bodies as inherently constructed objects (which they are, sociologically, although we often forget it) by telling the story from the point of view of synthetic androids who still remember the physical assembly of their bodies. Of course, these two story threads do not read as orthogonal to each other — they are in ways the same story.

I spent a substantial portion of my teenage years connected to variously-queer gothic cyperpunk BBSes, and later I 'grew up' to become a person who makes internet memes for a living. And so, though I have no personal experience of the gender themes written through Subserial Network's story, there is an undercurrent of loss and disappointment in it that resonated very strongly with me, that flowed from the ways in which our shared optimism about the digital revolution has given way to a darker digital reality. It is a very sad flavor of nostalgia.

But beside that dark beauty, there's optimism in the collaborative vibe of this project, which has additional writing by Penelope Evans, a lovely, perfectly matched soundtrack by Sarah Mancuso and art by BARCHboi who made the lovely and strange DEOIS II: DEIDIA. And for me there's particular beauty in Park's & Evans' writing, which captures the desperation with which digital pioneers, so often othered in their non-digital lives, reached out into the ether.

Geez, looking back over this blog post, I really feel like you should play every game I linked to, all eight of them. But I promised to only recommend you one at a time, so this is the one for right now.

Kuron and the Jelly Islands by Tatsunori Ishibashi