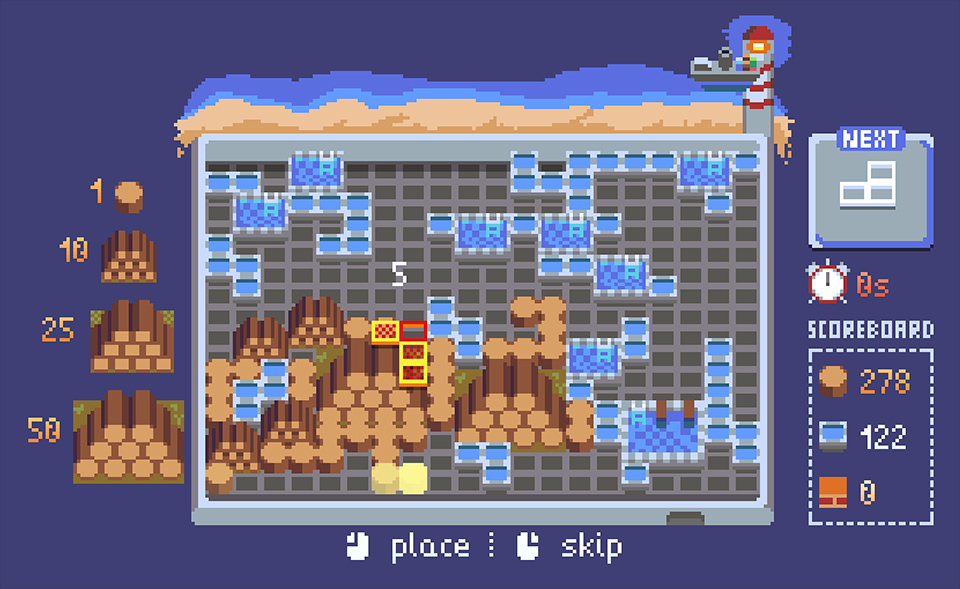 Almost all the complexity of Cathedral and related space-packing strategy games is stripped away here - there's no rotating pieces, no choosing which piece to use, no additional mechanics. You're just trying to pack your pieces as tight as possible, getting bonus points for making contiguous rectangles, and you're trying two hinder two other anonymous randos who are attempting to do the same thing.

It's as simple and minimal as that, but human opponents are smart and interesting, and it'll take you longer than you think before you're done with it. It's not an e-sport, y'know? It's an .io game. It's humble.

And is there anything more exciting right now than .io games? The unnecessary murder of flash by Google and Apple, long before HTML5 was a viable game platform, created a fallow period for browser games, when it was not economically feasible to launch flash games nor technically feasible to use alternatives. But we're out of the woods, I think, and there has been an explosion of these casually-massive multiplayer games - starting with agar.io and later slither.io and now many others. It's more than a genre, it's also a 'folk brand' where unrelated games by unrelated developers cross-promote each other. All they have in common is what is given by the affordances of current web technology: they are as dynamic and social as traditional massively multiplayer games but as easy to drop into (and out of) as solitaire. They don't mind if you walk away. They don't have that thirst that downloadable games are so stricken with.

the designers in this space are making cool things. And they're doing it without the help of publishers or portals. I love it.